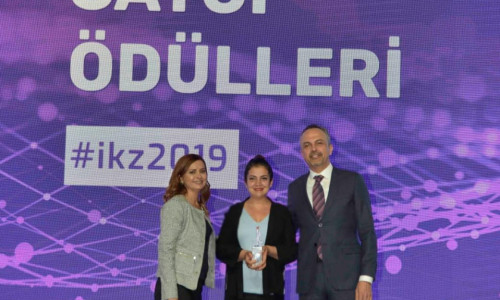 Kılıç Holding was rewarded with the Award for Respect for Human at the IK Summit carried out with help of the main sponsor Kariyer.net where practises that both facilitate users’ lives and enhance their experiences are transfered.

Being one of the few brands of the world in the field of seafood, Kılıç Holding maintains its remarkable position in terms of human-oriented working policies and a sense of health-preferred outputs.

Kılıç Holding was considered worthy to be awarded with the Award for Respect for Human in 2018 within the scope of awarding companies that are most-applied and most employment-friendly as well as being companies that are the fastest to give feedbacks to job applications at the highest level.

Songül Dönmez, the Executive of Human Resources Recruitment and Training, accepted the award on behalf of Kılıç Holding, which ranks among the few companies in the field of pisciculture and its exportation and the company has been making significant contributions to employment in Turkey especially when the country is going through a difficult process.

Songül Dönmez, Kılıç Holding’s Executive of Human Resources Recruitment and Training, expressed Kılıç Holding always prioritizes the sense of human-orientation and she continued ‘’As Kılıç Holding, we are honored to be awarded this year too just like we were the last year for our understanding to maintain respect for humans since our foundation. I accept this award on behalf of all our workers and I thank you.’’

Oshine has an amazing balance between beautiful design and powerful features. Its hard to imagine we could pack so features into the theme, yet preserve a clean modern design across all demos
Privacy Settings
We use cookies to enhance your experience while using our website. If you are using our Services via a browser you can restrict, block or remove cookies through your web browser settings. We also use content and scripts from third parties that may use tracking technologies. You can selectively provide your consent below to allow such third party embeds. For complete information about the cookies we use, data we collect and how we process them, please check our Privacy Policy
Youtube
Consent to display content from Youtube
Vimeo
Consent to display content from Vimeo
Google Maps
Consent to display content from Google
Save